States Threaten To Defy 'No Child Left Behind'

June 29, 2011 • Many states say they need emergency relief from the controversial education law's requirements — otherwise, they say, a huge number of decent schools will face sanctions. Idaho says it will just ignore the law this year.

States Threaten To Defy 'No Child Left Behind' 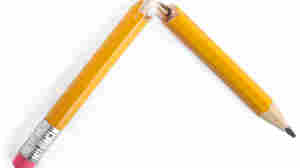 Research from Stanford University showed that while Philadelphia had a slightly higher percentage of charter schools outperforming traditional public schools, the city also had many more charter schools — more than half, in some categories — where the students weren't performing as well as they did at their previous school. iStockphoto.com hide caption

Can I Just Tell You?

June 27, 2011 • In this week's "Can I Just Tell You?" commentary, guest host Tony Cox reflects on teaching black young men as a communications professor at California State University. He remains convinced that education is an effective weapon to fight the poverty and hardship that many of these young men face.

DC Boasts US' Largest Exhibit On Blacks In Civil War

June 27, 2011 • The African-American Civil War Museum in Washington has been going through a major revamping as 2011 marks the 150th anniversary of the north and south's bitter battle between 1861-1865. To learn about the museum's grand re-opening, which is scheduled for July, and the history of African-Americans in the Civil War, guest host Tony Cox speaks with the museum's founding director Frank Smith.

DC Boasts US' Largest Exhibit On Blacks In Civil War

June 24, 2011 • High-performing students from around the country are meeting with some of the nation's top thinkers at an enrichment event known as 'Adventures of the Mind.' Paleontologist Jack Horner, former astronaut Bonnie Dunbar, and high school student Brandon Ford give an inside look at the meeting. 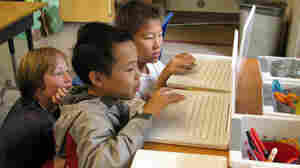 Fifth-graders (from left) Reese Toomre, Lucas Nguyen and Michael An race through the Khan Academy's Trigonometry Challenge. The program allows more advanced students to move ahead, while other students can proceed at their own pace. Larry Abramson/NPR hide caption 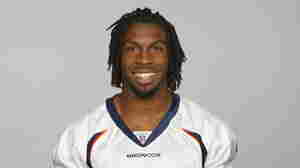 David Bruton of the Denver Broncos is teaching while the NFL works through a lockout. AP hide caption

June 23, 2011 • In April, Denver Broncos safety David Bruton started teaching math and social studies to students in grades one through 12. Host Michel Martin speaks with Bruton about why he decided to teach, what it's been like, and where his future lies in higher education and professional football. 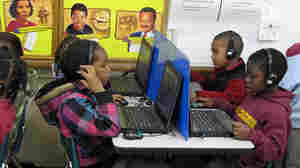 Kindergartners at KIPP Empower Academy in South Los Angeles work on laptops while in another corner of the room, a group of students do an activity with a teacher. Larry Abramson/NPR hide caption

June 22, 2011 • In an era of budget cuts, some schools are trying blended learning — where students in a class are divided into groups and then they split time between computer lessons and instruction with a teacher. The blended approach helps keep the feel of a small class without the cost of additional staff. 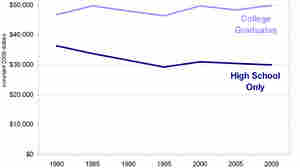 The Value Of College, In 2 Graphs

June 22, 2011 • In terms of both unemployment and earnings, the gap between high school and college grads keeps getting wider. But people keep questioning the value of college. 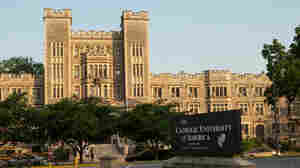 Gibbons Hall at Catholic University of America in Washington, D.C., will be switching from co-ed dorms to single-sex dorms in the fall. Emily Bogle/NPR hide caption

June 21, 2011 • University President John Garvey says co-ed housing contributes to a culture of binge drinking and casual sex that conflicts with Catholic values. The college will be the first to take away co-ed dorms.

In Detroit, Low-Performing Schools Get A Makeover

June 20, 2011 • Michigan's governor announced a new reform program for Detroit schools Monday. The program creates a mini district for the city's lowest performing schools — and it works with university and private partners to improve schools and offer guaranteed college scholarships for city students. Detroit's long-troubled school system has been beset in recent years by financial mismanagement and declining enrollment. The district has already embarked on a plan to turn nearly half of its schools into charter schools.

In Detroit, Low-Performing Schools Get A Makeover 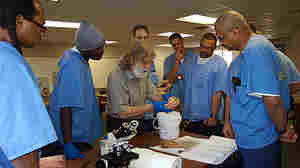 Charles Gross, a neuroscience professor at Princeton University, looks at a sheep brain with students at San Quentin as part of an Introduction to Biology class at the prison. Courtesy of Linn Lee hide caption

June 20, 2011 • The Prison University Project at San Quentin State Prison organizes volunteer instructors from schools like UC-Berkeley and Stanford, who conduct classes inside the prison walls. Inmates can earn degrees, and in the process, help bring calm to the once-notoriously violent prison. 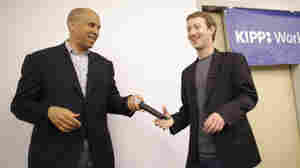 June 20, 2011 • Last fall, Facebook founder Mark Zuckerberg gave a $100 million to improve public schools in Newark, N.J. But nine months later, jubilation over the gift has turned to anger and suspicion about the real purpose behind the money. 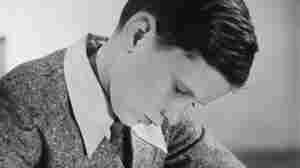 June 19, 2011 • Study Reveals Ignorance Of US History, a headline reads. Think it's a story from this week? You're wrong. 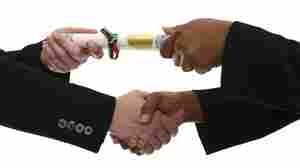 With the cost of tuition skyrocketing and unemployment rates high, should Americans bother going to college? iStockphoto.com hide caption

Making Headlines Since The '70s: Is College Worth It?

June 18, 2011 • The value of a college degree has been hitting a nerve lately. It isn't a new trend: There's a spike in this type of story during economic downturns. But even in our current economic recession, experts say graduates are still less likely to be unemployed and more likely to earn higher wages.

Making Headlines Since The '70s: Is College Worth It?