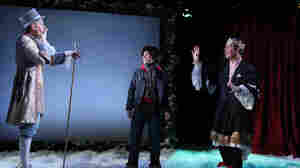 Seven In One Blow, which plays at New York City's Axis Theater, is one of many recurring holiday-season productions across the U.S. that bring a distinctly local flavor and history to bear. Dixie Sheridan/ hide caption

Around The U.S., Holiday Theater With Local Flair

November 30, 2013 • Each year as they begin to deck the halls, theaters around the country put on seasonal shows. And not just the old standbys: Singularly local stories, including a New York City fairy tale and a Chicago-set musical, have become real holiday traditions.

November 29, 2013 • Choreographer Elizabeth Streb pushes the boundaries of Newtonian physics--with dance. In her show Forces, dancers fly, fall, and collide in mid-air. No wonder the "action architect" has her share of scientist fans, among them, big-thinking particle physicist Lisa Randall. 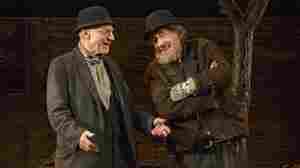 Patrick Stewart and Ian McKellen play Vladimir and Estragon in Waiting for Godot, one of two 20th-century classics they're doing in repertory this season on Broadway. Joan Marcus/ hide caption

A Couple Of Knights (And Matinees) On Broadway

A Couple Of Knights (And Matinees) On Broadway 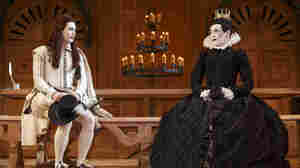 Mark Rylance as Olivia (right) and Samuel Barnett as Viola in Twelfth Night. The Broadway production, which first played at London's Globe Theatre, is done in the Elizabethan tradition, with an all-male cast. Joan Marcus/ hide caption

Here's A Wild Idea For Shakespeare: Do It His Way

November 10, 2013 • In the new Broadway productions of Twelfth Night and Richard III, imported from London's Globe Theatre, the director and actors put on the shows pretty much as the Bard would have staged them — with an all-male cast and everything.

Here's A Wild Idea For Shakespeare: Do It His Way

'We Will Rock You': A Bohemian Musical

November 9, 2013 • A musical featuring songs by the British rock band Queen, about a post-rock 'n' roll world where half-remembered hits have a mythical force, is beginning its first North American tour. Queen guitarist Brian May says the show's anti-corporate message brings the power of rock back to the people.

'We Will Rock You': A Bohemian Musical 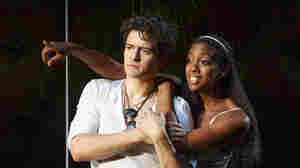 A Fresh Face To The Classic 'Juliet'

October 28, 2013 • The daughter of actress Phylicia Rashad stars opposite Orlando Bloom in a new Broadway production of Romeo and Juliet. Condola Rashad speaks with guest host Celeste Headlee about this new twist on the classic Shakespearean play.

Condola Rashad: A Fresh Face To The Classic 'Juliet' 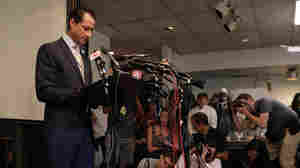 New York Rep. Anthony Weiner announces his resignation from Congress in the wake of a sexting scandal on June 16, 2011. His speech that day was incorporated into the play The Weiner Monologues. Spencer Platt/Getty Images hide caption

Anthony Weiner (The Myth, Not The Man) Takes The Stage

October 23, 2013 • The former congressman's exploits have been turned into an off-off-Broadway play, The Weiner Monologues. The production uses only found text — articles, talk-show jokes, Weiner's own words, and so on — in its script.

Anthony Weiner (The Myth, Not The Man) Takes The Stage 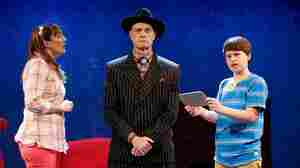 For John Kander, A New 'Landing' At A Familiar Spot

October 22, 2013 • The 86-year-old Broadway titan — who co-wrote such hits as Cabaret and Chicago with the late Fred Ebb — is back with a new show and a new writing partner, 35-year-old Greg Pierce.

For John Kander, A New 'Landing' At A Familiar Spot 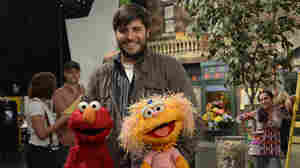 Sesame Street music director Bill Sherman with Elmo and Zoe on the set. Sherman won a Tony Award for In the Heights in 2008 and has recruited Broadway peers to compose for the children's show. Howard Sherman for NPR hide caption

On 'Sesame Street,' The Sweet Sounds Of Another Thoroughfare

October 22, 2013 • The children's show is increasingly turning to renowned Broadway composers for many of its original songs. Lin-Manuel Miranda (In the Heights), Jason Robert Brown (Parade) and Tom Kitt (Next to Normal) are just some of those who've contributed. 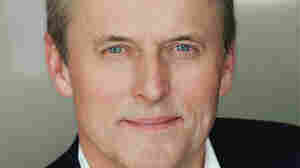 'A Time To' Revisit Clanton, Miss., In John Grisham's Latest

October 18, 2013 • Grisham is returning to the world of his first novel, A Time to Kill, with a sequel called Sycamore Row. The book comes out at the same time as the stage adaptation of A Time to Kill opens on Broadway. NPR's Lynn Neary profiles Grisham, who says he loved writing the new book so much, he didn't want to hand it to the publisher.

'A Time To' Revisit Clanton, Miss., In John Grisham's Latest 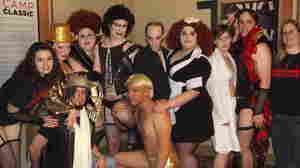 October 15, 2013 • Matthew Weddig explores the phenomenon of Rocky Horror midnight shows with "shadow casts." While they're well-known as cultish fan events, some performers say they also serve an additional role as a place where lots of kinds of bodies can find a place to dance. 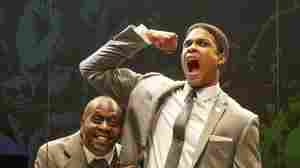 October 7, 2013 • The New York City Opera will close its doors this month after 70 years of production. Guest host Celeste Headlee talks to composer Anthony Davis whose work X, The Life and Times of Malcolm X premiered at the opera almost 30 years ago. 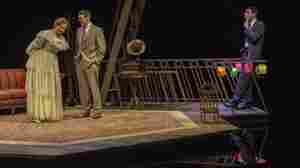 In the play Amanda (Jones), is devoted to finding a "gentleman caller" for her daughter and so Tom (Quinto) brings one home (Smith). Michael J. Lutch/ hide caption

A Minimalist 'Menagerie' That Packs Plenty Of Power

A Minimalist 'Menagerie' That Packs Plenty Of Power